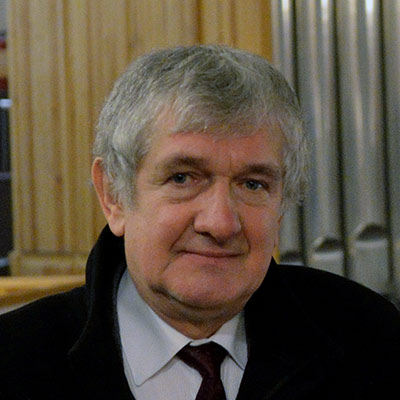 Julian Gembalski (1950) graduated from Państwowa Wyższa Szkola Muzyczna in Katowice where he studied organ under Henryk Klaja along with composition and music theory. He then studied in Belgium and France (under Flor Peeters, André Isoir and Michel Chapuis; he also studied musicology under Jean Saint-Arroman). He has given recitals in numerous European countries and the USA, and recorded 45 albums (including the edition “The Anthology of the Upper Silesia Organs” which features almost ninety valuable organs from the region, and seven albums with the soprano Elżbieta Grodzka-Łopuszyńska). Gembalski is active in the field of organ music and composition, and he is both a researcher and teacher of organ. He has written numerous publications on organ interpretation and improvisation as well as history of organs and renovation of historical instruments. He has won many piano and organ improvisation competitions (Gdańsk, Nowa Ruda, Weimar, or the award “Orpheus” from the 38th “Warszawska Jesień”). He has received a number of honorary awards (e.g. the medal “pro Ecclesia et Pontifice” from the Pope John Paul II). Julian Gembalski teaches organ at Akademia Muzyczna im. Karola Szymanowskiego in Katowice where he is also the head of the Department of Organ and Sacred Music. From 1996 to 2002 he was the head of the academy. In 2004 he founded the first museum of organ in Central Europe. For many years he has worked as the archdiocese organologist. 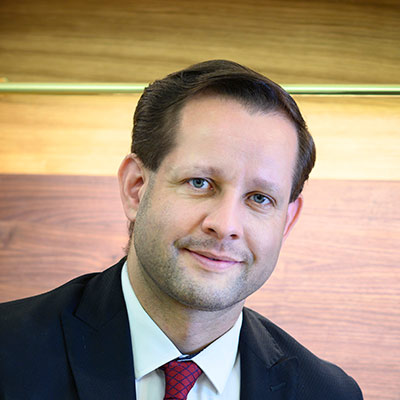 Petr Čech (1979) studied piano (Marta Toaderová) and organ (Jan Hora) at the Prague Conservatoire, he graduated from the Music Faculty at the Academy of Performing Arts in Prague (Jan Hora) and from Staatliche Hochschule für Musik und Darstellende in Stuttgart (Jon Laukvik). In 2011 he received a doctorate at the Academy of Performing Arts in Bratislava (Imrich Szabó). Petr Čech has won a number of international competitions (in Prague, Luxembourg, Gdańsk, Brno, and Opava). He performs at prestigious festivals in the Czech Republic and abroad (Prague Spring, Audite Organum, Bratislava Organ Festival, Janáček’s May, International Organ Festival Olomouc, Kamień Pomorski, Sochi, Barcelona, Europäische Musikwochen Passau, Le Festival International du Domaine Forget-Québec, Canada). He often plays compositions by Czech authors and has received awards for his performances, such as the Czech Music Foundation Award, Leoš Janáček Foundation Award, and a special award from a meeting of young musicians “Luxembourg Today’s Music”. Petr Čech records the 20th century organ compositions with Czech and foreign record labels (A. Hába’s organ opuses – Vixen Ltd. Edition, L. Janáček’s compositions – Columna Música Edition, O. A. Tichý’s organ compositions – VDE-Gallo Records, P. Eben’s compositions – Bonner Münster Edition). Petr Čech plays the organ in the Church of Our Lady before Týn and is teaching at the Prague Conservatoire where he has been the director since 2018. 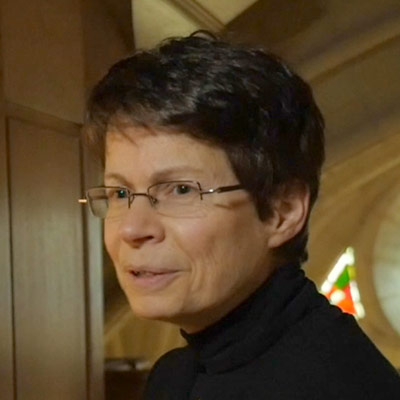 Aude Heurtematte (1957) studied organ under Gaston Litaize, Jean Boyer and Odile Bailleux and the interpretation of the 17th and 18th century French organ compositions under Jean Saint-Arroman and Michel Chapuis. She gives concerts not only in Europe, but also Asia and North America. She is regularly invited to perform at musical evenings devoted in particular to French Baroque music. She often sits as a member of jury at international competitions (e.g. Grand Prix de Chartres). She is an emeritus professor at the Académie Supérieure de Musique and the Conservatoire Régional in Strasbourg where she also teaches at Conservatoire Régional. Heurtematte is a titular organist in the Lutheran church Les Billettes and the Church of Saint-Gervais in Paris where she plays one of the most valuable baroque organs made by the organist Langhedul and then extended and renovated by Pescheur, Thierry and Clicquot. Members of the renowned composer dynasty the Couperins played the organ for three centuries. Anne Heurtematte played the very same organ when she recorded the complete organ works of the best known member of the Couperin family - Françoise Couperin’s “Le Grand”. 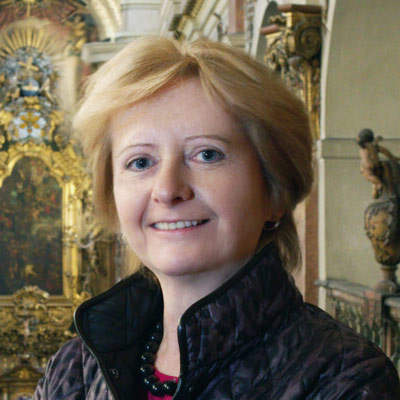 Irena Chřibková (1959) studied at the Conservatoire in Kroměříž (Karel Pokora), at the Academy of Performing Arts in Prague (Milan Šlechta) and in Paris (Susan Landale). After her studies she entered a number of interpretation competitions, which started her career. Chřibková gives concerts in Europe, Japan, Russa, Iceland, Israel and the USA. She presents international organ repertoire from the Baroque period up to the present. She particularly focuses on the compositions by Petr Eben and Bedřich Antonín Wiedermann. Chřibková cooperates with leading singers, instrumentalists, choirs and orchestras. Her discography predominantly features works by Czech and French organ composers. She taught at the Conservatoire of P. J. Vejvanovský (1988–1994) and the Evangelical Academy Conservatoire (1991–1994), now she is teaching in Prague. She is a titular organist and manager of the organ loft in the Basilica of St. James in Prague. In 1996 she founded the International Organ Festival that takes place in the Basilica and she also organizes other cycles there. In the course of her employment in the Basilica she popularized regular Sunday half-hour performances of organ sacred music. Irena Chřibková regularly sits on the jury of organ competitions and teaches courses on interpretation. She is the president of the Sancti Jacobi Organum Foundation. 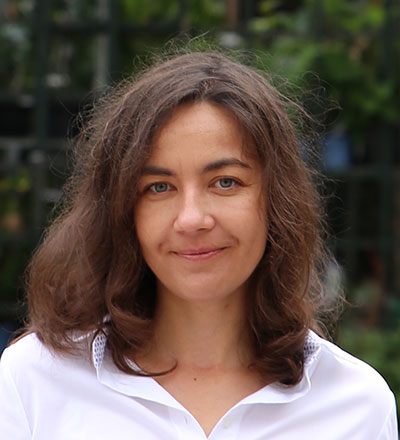 Zuzana Ferjenčíková is Slovak organist, pianist and composer. She was educated from early childhood in alignment with the Russian piano tradition (Olga Ormisova, Jevgenij Irshai). She pursued organ studies at the conservatory in Banská Bystrica and at the universities in Bratislava and Vienna (Milan Hric, J. V. Michalko, Peter Planyavsky). She has been influenced especially by the teaching of and collaboration with her Maître Jean Guillou (Paris). She won numerous prizes in international competitions and in 2004 she was the first woman to be awarded the First Prize at the significant International Organ Improvisation Competition in Haarlem in the Netherlands.

She was the main organist at the Benedictine Abbey Unserer Lieben Frau zu den Schotten in Vienna, and is a honorary organiste co-titulaire on the historical romantic Th. Puget - organ in the Basilica Notre Dame des Tables in Montpellier. She has founded the Vienna Franz Liszt Society and serves as its president. She gives master-classes (such as in Amsterdam Orgelpark) and takes part in international organ competition juries. Since 2015 she lives in Switzerland and follows an intense concert and recording career.
From September 2021 she is appointed professor for organ at Codarts University in Rotterdam.

As a performer, her interests lie mainly in the Romantic period, in particular the works of Franz Liszt, but also in music of the 20th century, notably the compositions of Jean Guillou and Marcel Dupré. As a composer, she writes concert pieces for organ, piano and various instrumental formations and dedicates herself to transcriptions of piano and orchestral works for organ.
Since 2018 she records exclusively for the German Label MDG (Musikhaus Dabringhaus und Grimm). New releases: Guillou Organ works Vol. 1; Liszt Organ works Vol. 1. 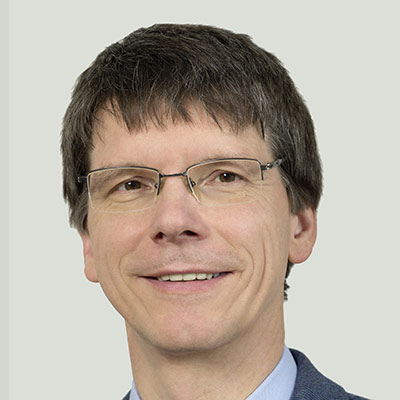 Martin Sander (1963) studied under Ulrich Bremsteller at Hochschule für Musik und Theater in Hannover. He attended master courses taught by Harald Vogel, Luigi Ferdinando Tagliavini, Flor Peeters and Edgar Krapp. He received a doctorate in Physical Chemistry at Göttingen University. Sander has won several major competitions (ARD in Munich, Internationaler Johann Sebastian Bach Wettbewerb in Leipzig, Prague Spring, Mushasino in Tokyo, Internationaler Anton Bruckner Orgelwettbewerb in Linz). His recitals have taken him nearly all around the world. He has been invited to numerous musical festivals and played in many important cathedrals and halls as a soloist and with many renowned orchestras (Berliner Philharmonie, Bach-Collegium Stuttgart, Basel Sinfonietta, Radiophilharmonie Hannover, or Fukuoka Symphonietta). Various German and foreign radio and TV stations recorded many of his concerts. Martin Sander writes articles and publications on the stylistic aspects of organ music, and he has participated in numerous organ and organological projects, including restorations of historical instruments. He predominantly performs compositions by Johann Sebastian Bach and Max Reger, but also the 20th century composers such as Petr Eben, Olivier Messiaen and Jehan Alain. He is currently teaching at Hochschule für Musik in Detmold and at Musik-Akademie in Basel. 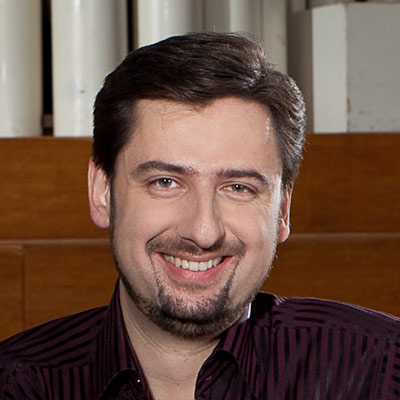 Marek Vrábel (1973) studied organ at the Academy of Performing Arts in Bratislava (Ján Vladimír Michalko). He received a doctorate at VŠMU where he studied under Ján Vladimír Michalko and Ivan Sokol. He attended masterly interpretation courses abroad taught by Jean Guillou, Susan Landale and Reitze Smits. He has won several national and international awards (the Sebastian Award for an extraordinary contribution to the legacy of Johann Sebastian Bach awarded by Ars Ante Portas, the Fra Angelica Award from Rada KBS for his contribution to the Christian values in performing arts in Slovakia, and the Frico Kafenda Award from the Music Foundation for outstanding interpretations and constant presentation of Slovak organ music at home and abroad). In the course of his career he performed at numerous renowned international organ festivals (Bern, Brașov, Caen, Helsinki, Katowice, Kishinev, Tashkent, Lahti, Ljubljana, Munich, Prague, Vienna). He has recorded eight albums with the labels MSP Records or Inedita Austria. With Diskant he recorded a complete set of organ works by Štefan Németh-Šamorínský. Numerous composers dedicated theirs compositions to Vrábel. He presented numerous premieres of the compositions by Slovak composers as well as Petr Eben’s compositions on the Slovak radio. Vrábel is the director of the Bratislava Organ Festival and a member of the Board for Science, Education, and Culture under the Episcopal Conference of Slovakia. Since 1997 he has been teaching organ at the Church Conservatoire in Bratislava. In 2019 he became the director of the school.