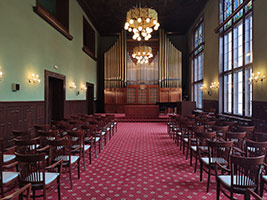 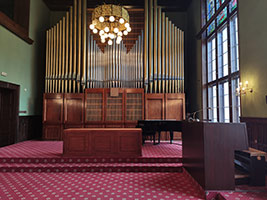 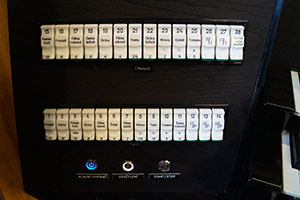 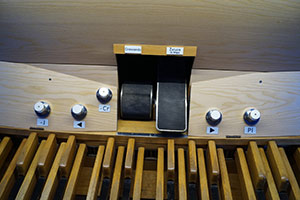 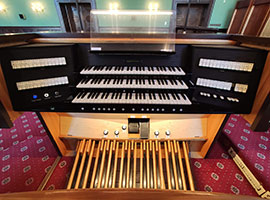 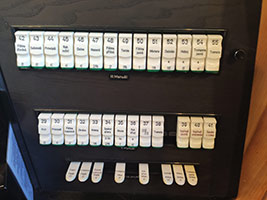 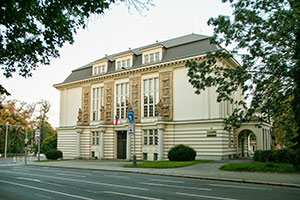 The Rieger-Kloss organ (Opus 3485 from 1978) has three manuals and a pedalboard (dual concave and radiating according BDO 2000). The organ comprises electric key and stop actions, a slider windchest, and a cone valve chest for prospect and transmission. The instrument has 42 stops (one transmission) with 3033 pipes. All parts of the organ are installed in one case situated in the back of a raised platform in the hall. The console is placed on the right side of the stage (the swell box is mechanical controlled, the electric action is connected by an armoured power cable). The control of the registers is solved by means of the registration memory device "Setzer".The 2nd and 3rd manual tremulants are regulated by a joint adjustable potentiometer. The organ sound characteristics as well as disposition are typical for the Rieger-Kloss instruments made after the second half of the 20th century.

History of the building

The building of Petr Bezruč Library and the District Chamber of Commerce, the former seat of Chamber of Business and Commerce, is a distinctive architectural work. It is modern, yet the classicist decor gives it a timeless feel. The front facade features is adorned with allegoric reliefs of crafts, upward facing reliefs with figures of children, and large Art Nouveau stained glass windows. The building was designed by architect Leopold Bauer, a student of a Viennese architect Otto Wagner. Bauer designed not only the building, but also its interior featuring a central entrance hall, monumental staircase and decorative stucco ornamentation. The house was built in the years 1908–1910. The former Chamber of Business and Commerce assembly hall is now used as a ceremonial and concert hall. In 1978 the newly built concert organ inspired the first year of the biennial Competition of Young Organists that took place in the hall. In 2010 the competition transformed into Petr Eben International Organ Competition.