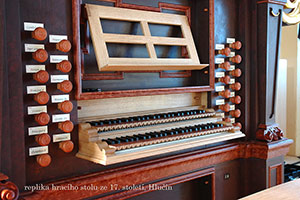 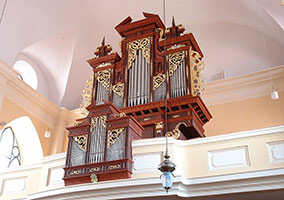 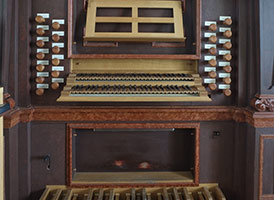 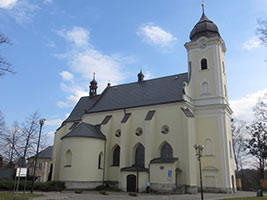 The organ in the Church of St. John the Baptist was built in 2006. It is a replica of an instrument from the 17th century and it was built by the Kánský – Brachtl organ workshop.

Due to the frequent reconstructions of the Hlučín organ from the 17th century, and especially due to insensitive interventions in the disposition of the original Baroque instrument that took place in the 19th century, today we have no information about the exact disposition of the original organ. Even though it was carefully maintained in the course of the 20th century, the repairs of this constantly rebuilt instrument failed to provide a solution to the unsatisfactory technical and sound condition of the organ. The Hlučín parish then made the sensible decision to replace the old organ with a new one. Kánský and Brachtl Organ Workshop won the tender for the construction of the new instrument. Their conceptual and progressive design leaned towards a historicizing approach that no longer favours a universal disposition of the instrument, but in accordance with the current trends of informed contemporary interpretation prefers the historicizing version in both sound and technical treatment. Although the original disposition of the 17th-century Hlučín Baroque organ was no longer known, the organ builders based their project on the disposition of instruments from the second half of the 17th century, including materials, handwork, construction and technology. The project was accepted with the restriction that the instrument must have a chromatic range of C - f³ in the manual and C - d¹ in the pedal. The organ with two manuals (the 1st manual back positive, the 2nd manual the main body of the organ) and with a pedal is controlled by a mechanical tract with a drawer wind chest. When designing the case, the organ builders were inspired by the instrument in the Church of the Transfiguration in Pezinok, which was made in 1662 by an unknown builder from the Butz/Passau circle of organ builders. The case now corresponds with the Baroque interior of the Hlučín church that features a preserved Baroque pulpit and high altar. The pipes, fittings and carvings are the result of the handwork of skilled craftsmen. The disposition resembles Italian and South German period organs. The Valotti intonation and tuning respect the period trends of the aforementioned countries. The instrument was built in 2006. The design and conception of the organ was prepared by Jaromír Kánský, intonation and tuning were carried out by Josef Brachtl, the carvings were made by František Nedomlel, the metalwork was done by Josef Ničman, the staffing by Josef Belis and the gilding was done by Zdislava Repková and Alena Pankrácová.

The Church of St. John the Baptist is a listed sacral building and one of the landmarks of Hlučín. The earliest reference to the church dates back to 1378. At that time, the Opava Princes Václav and Přemek gave permission to the brothers Peter and Kuneš of Varta, owners of the farmstead near Hlučín, to donate six threescore of groschen to build a chapel with a new side altar that symbolised "Corporis Christi" (Body of Christ). The names of the builders are not recorded in the chronicle. The Chapel of St. Anne was added in 1508. The Chapel of the Holy Angels (formerly the Three Kings) and the presbytery date back to an earlier date. In the years 1522–1533 the Chapel of St. Michael (now the Holy Sepulchre) and the Chapel of Our Lady of Egypt (now the side entrance) were added. With these extensions the church took on the shape of a cross. After a fire in 1616, the church was vaulted with a Baroque vault with lunettes, and in 1618 the church interior was rebuilt. In 1736 a small tower was built over the presbytery and in 1791 the construction of a square tower began. The tower was segmented into lesene frames with a continuous cornice. Three bells (Jan, Margareta, Marie) were hung in the church tower. The tower is topped with a bell-shaped mansard roof. The entire structure of the Church of St John the Baptist is a combination of several styles – from the Gothic perimeter wall with supporting pillars and the Gothic presbytery with a ribbed cross vault to the Renaissance chapels and the Baroque façade and tower. The main altar from the first half of the 17th century, the pulpit made in 1748, and the side altars also bear signs of the Baroque style. The presbytery, which was partially rebuilt in 1902–1908 and supplemented with neo-Gothic elements, features a late Gothic panel painting of the Crucifixion of Christ, together with a set of Renaissance tombstones and Baroque furniture. The Baroque interior of the church was completed in 2006 with a replica of a Baroque organ case that has a corresponding sound. Today the organ plays an important role in Hlučín's cultural life. The tones of this royal instrument can be regularly heard here during the international music festivals Janáček's May (now Leoš Janáček International Music Festival) and St. Wenceslas Music Festival. Peter Eben International Organ Competition will also make a significant contribution to the town and church musical events. The contestants will play this precious instrument for the first time in 2022 during the second round of the competition.