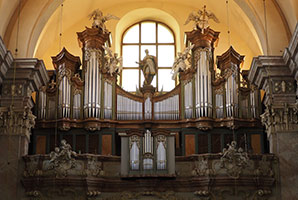 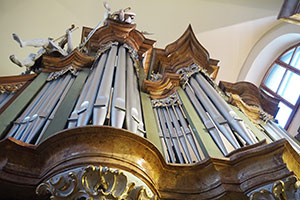 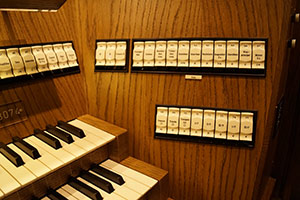 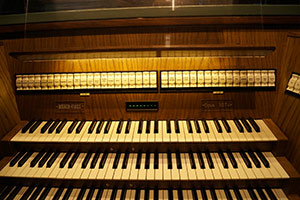 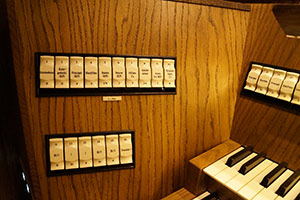 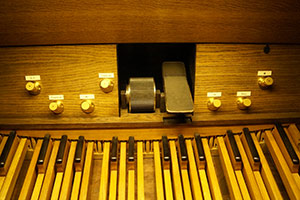 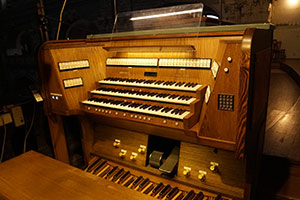 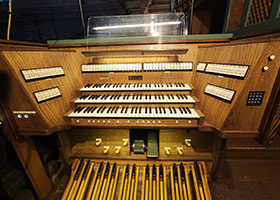 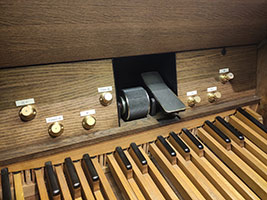 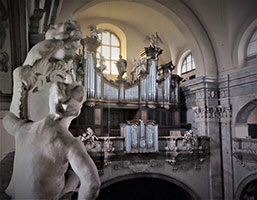 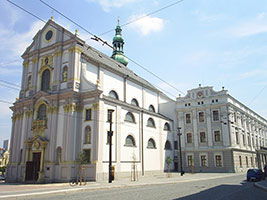 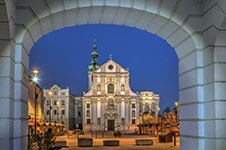 The organ in the Church of St. Vojtěch has a long history, which includes several major reconstructions. The first report on the organ dates back to the 1720s. It was built for 222 guilders between the years 1720 and 1722 by organ makers Václav Thiel and Kristina Ryšáková (the wife of organ maker Ignác Ryšák) for the Jesuit church in Opava (the report does not mention the disposition of the organ). In 1775 František Horčička built an organ with 28 ranks in the church. In 1897 the company Gebrüder-Rieger used Horčička’s original casing to built a new instrument under the opus number 601 with 20 ranks. Finally, in 1949 the company Rieger-Kloss rebuilt and extended the original case to construct the present organ under the opus number 3074. With 54 ranks and 5485 pipes it is one of the biggest instruments in the Ostrava-Opava Diocese. The disposition and sound are universal. The original tracker action was dual – pneumatic and electro-pneumatic with two keydesks and cone-valve chests. Later the instrument underwent minor changes (addition of windchest with reed ranks, a partial reconstruction of switching relays, change in the wind suction, and a new power supply), but it has essentially remained the same. The instrument was regularly maintained with all main parts well kept, but with time wear and tear of the main technical components, in particular the action, resulted in susceptibility to failure. Between the years 2018 and 2020 the organ underwent a major reconstruction of the action, console and keyboards (dual concave and radiating pedalboard and all manual keyboard according BDO 2000). The instrument now has a unified electro-pneumatic action. Action part of the individual cone valves is pneumatic. The control of the registers is solved by means of the registration memory device "Setzer". The conception and realization of the reconstruction of the organ in the Church of St. Vojtěch was carried out by organolog in the Ostrava-Opava Diocese Bc. Jiří Krátký, Ing. Petr Bernat, Ph.D., and Petr Strakoš.

St. Vojtěch’s Church was build by the Jesuit Order between the years 1675 and 1681 in the place of the former Gothic Church of St. Jiří, which belonged to the Teutonic Order and later the Lutherans. The church was built and presumably also designed by two Italian brothers – Mikuláš and Jakub Braschs. Inspired by a Roman church Il Gesú, the new church has one nave with three pairs of through chapels on the side and rectangular presbytery. There is a tower north of presbytery and a sacristy south of presbytery. The facade has graded avant-corps, it is horizontally segmented by solid ledgers and vertically segmented by pillars with Corinthian capitals with figures of saints in between. The tympanum above the portal with pillars features the initials of the Jesuit motto Ad Maiorem Dei Gloriam (For the greater glory of God) with a sculpture of three Jesuit martyrs who died in Japan. Above a window on the second floor there is the coat of arms of the Liechtensteins, who supported the order as well as the church itself. The church was newly decorated between the years 1725 and 1750 by a Baroque painter František Rehoř Ignác Eckstein. When the church was bombed at the end of World War II, the paintings were irrevocably damaged, only the frescos in the side chapels have been preserved. The impressive two-storey main altar devoted to St. Jiří with a painting of St. Vojtěch was also destroyed. The main altar as well as all the other altars, scultpures, and the pulpit were made by the sculptor Jan Jiří Lehner. After the war the church was newly painted by Valentin Držkovic and other Silesian painters. In 1984 a new main altar painted by Felix Ivo Leicher was brought from the abandonded Capuchin Church of St. Josef in Fulnek. In the 17th century St. Vojtěch’s Church together with the monumental Jesuit college represented the centre of culture in town. There are accounts of music and literary activities of the monks who performed religious dramas during services and holy days. One of the protagonists was Bohuslav Balbín. Pavel Josef Vejvanovský composed his first ecclesiastic and liturgical works here in the first year of his studies (1656). In the 18th and 19th centuries the church with the Jesuit college and adjacent Jesuit grammar school were the only places where services took place in Czech. Silesian revivalists, including the founder of genetics Johan Gregor Mendel and musical composer Pavel Křížkovský, studied at the Jesuit grammar school and attended the services in St. Vojtěch’s Church.