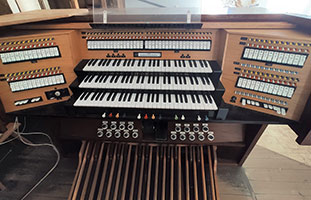 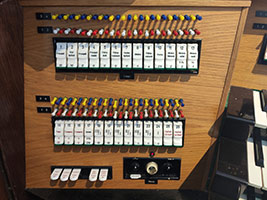 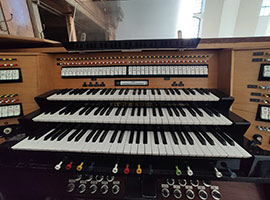 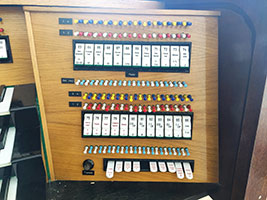 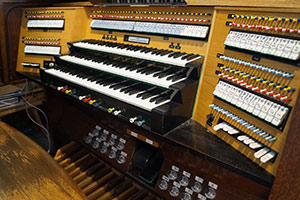 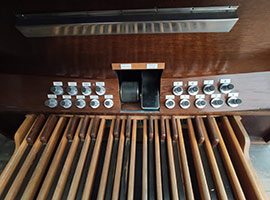 The first indirect mention of the organ in this church dates back to 1506. It was not until 1620 that we get a clearer idea of the size of the organ repaired by the organ builder Stanislav Bartodějský. The organ had three manuals with a pedal and 26 registers, and at that time it was probably the largest instrument in Bohemian Silesia and Moravia. The new organ of unknown origin was installed around 1670 by Jakub Ryšák, an important organ builder from Opava. The organ had two manuals with a pedal and 28 registers. It is likely that the organ survived the fire of Opava in 1689, because in 1708 the town council made an agreement with Ryšák’s son Ignác to repair the organ that his father had installed in the church. The organ was to be reduced, restored and intonationally modified in order to preserve it and help it produce a better sound. The reduction was minimal, from 28 to 27 registers, but in the course of the repair, Ignác almost completely rebuilt the organ. However, the organ did not work as expected, which is evidenced by the fact that between 1720 and 1740 Ignác’s widow Kristýna kept asking in vain to be paid for her husband’s additional work on the instrument. The work on the organ was then picked up by Kristýna Ryšáková’s second husband, Václav Thiel. A completely new organ was most likely built after the second half of the 18th century. In the inventory of damage after the great fire of 1758, the organ is mentioned in contemporary reports as extremely valuable and unmatched by any other in Upper Silesia. The next organ was built in 1780 by the organist František Horčička, a member of the Jesuit order. The organ of St. Mary's Church in Opava was his greatest work; it featured two manuals with pedals and was equipped with 34 registers. This instrument was rebuilt in 1836 by the Opava organist Karel Kuttler, who kept the original organ case. At the end of the 19th century, between 1893 and 1894, a completely new organ with 31 registers and three manuals with pedal was built by the Krnov company Gebrüder Rieger. This instrument – that still used a mechanical tract system – was then rebuilt in 1924 by the successor company Rieger into an organ with a pneumatic tract. In 1957 the organ was extended to 51 registers by the Rieger-Kloss company from Krnov (design by Ing. Ota Veverka, intonation by Rudolf Holoubek). In 1991 the instrument was rebuilt (new case, double concave pedal, and a radial in accordance with BDO 2000 standards, electro-pneumatic tract, regulation of tremolo of the 2nd and 3rd manuals is adjustable by a common control frequency – potentiometer). The instrument was rebuilt into its present form (56 registers with 5381 pipes) by Rieger-Kloss (conceptual design by Ing. Bohumil Plánský, intonation modifications by Jan Kostera). The case and many of the pipes date back to 1893.

The Co-cathedral of the Assumption of the Virgin Mary in Opava is a unique example of the Silesian Brick Gothic. This style is not widely represented in the Czech Republic. The co-cathedral is a three-nave hall church with an extended presbytery. It was built on the site of a Romanesque basilic church; today we know very little about the appearance of this original church. The history of co-cathedral is closely connected with the Teutonic Order, whose unspecified possessions in Opava were confirmed by King Přemysl Otakar I. The first reference to the church dates back to the 13th century. The building features two towers in the western front and a long choir that ends with five octagonal sides. The façade features unplastered bricks with stone details. The oldest part of this monumental building is the lower north tower topped with a crenelation which was built in the Romanesque period. The south tower was built shortly afterwards as a separate building funded by the town. When the tower got an octagonal Baroque extension, it became a true landmark of the town due to its height. In the first decades of the 14th century, the construction of the large presbytery began. Because the foundations were unstable, the entire structure was secured by ten buttresses topped with a pitched roof and two supporting arch pillars. The northern one collapsed at the end of the 17th century, but the southern one stands to this day. The presbytery was vaulted with a standard cross vault around 1330. The construction of the church was finished in 1373 with a three-nave hall built between the presbytery on the east and the two towers on the west. As was customary in the Middle Ages, side chapels were soon built around the perimeter of the church. Around 1400 a representative antechamber made of quarry stone was built before the lavish portal of the west front with two towers. The entry features a broken arcade with a magnificent stellar vault. While the exterior of the church is distinctly Gothic – apart from the Renaissance tombstones in the south entrance hall, the Renaissance window jamb with semi-circular ending, and the richly decorated old sacristy (now St. Anne's Chapel) – the interior has been almost entirely baroquized and there are also some classicistic elements to be seen. These modifications are the result of two major fires in 1689 and 1758. The Baroque decoration of the presbytery is particularly noteworthy. The main altar with six columns and a crown with a golden cross dates back to 1782–1784; between two columns there is a relief of the Assumption of the Virgin Mary alabastered by the Opava builder and plasterer Jan Schubert. The cycle of paintings from the life of the Virgin Mary by Ignác Joseph Raab, dating back to 1772–1773 also attracts attention. On the north side of the presbytery there is a monumental gilded tombstone made of dark marble with alabaster statues – it is an epitaph of Prince Karel I of Liechtenstein from 1765 by a renowned 18th century Silesian sculptor Johann Jiří Lehner. There are two functioning pulpits in the co-cathedral; the south pulpit, the baptismal font and the sculpture of the Baptism of the Lord were made by Jan Schubert. The construction of the three aisles was finished with classicistic pillars topped with Corinthian capitals in the 1780s by the builder Heinrich Haucke. The vaults are flat with individual bays separated by bands. The three-aisle church is decorated with fourteen Stations of the Cross painted by the Opava painter Ignác Günther in 1801. The choir loft is spacious and it features a Neo-Renaissance organ case. In 1996 the Co-cathedral of the Assumption of the Virgin Mary became the second residence of the Bishop of Ostrava-Opava. The roofs and the top part of the south tower were repaired from 2014. In 2019–2020 the co-cathedral underwent a general reconstruction that included both the exterior and interior of the building.